This event is part of a three month Outlooks program which will provide insight and analysis on the key themes, sectors, and regions in what is set to be a fascinating year for the markets 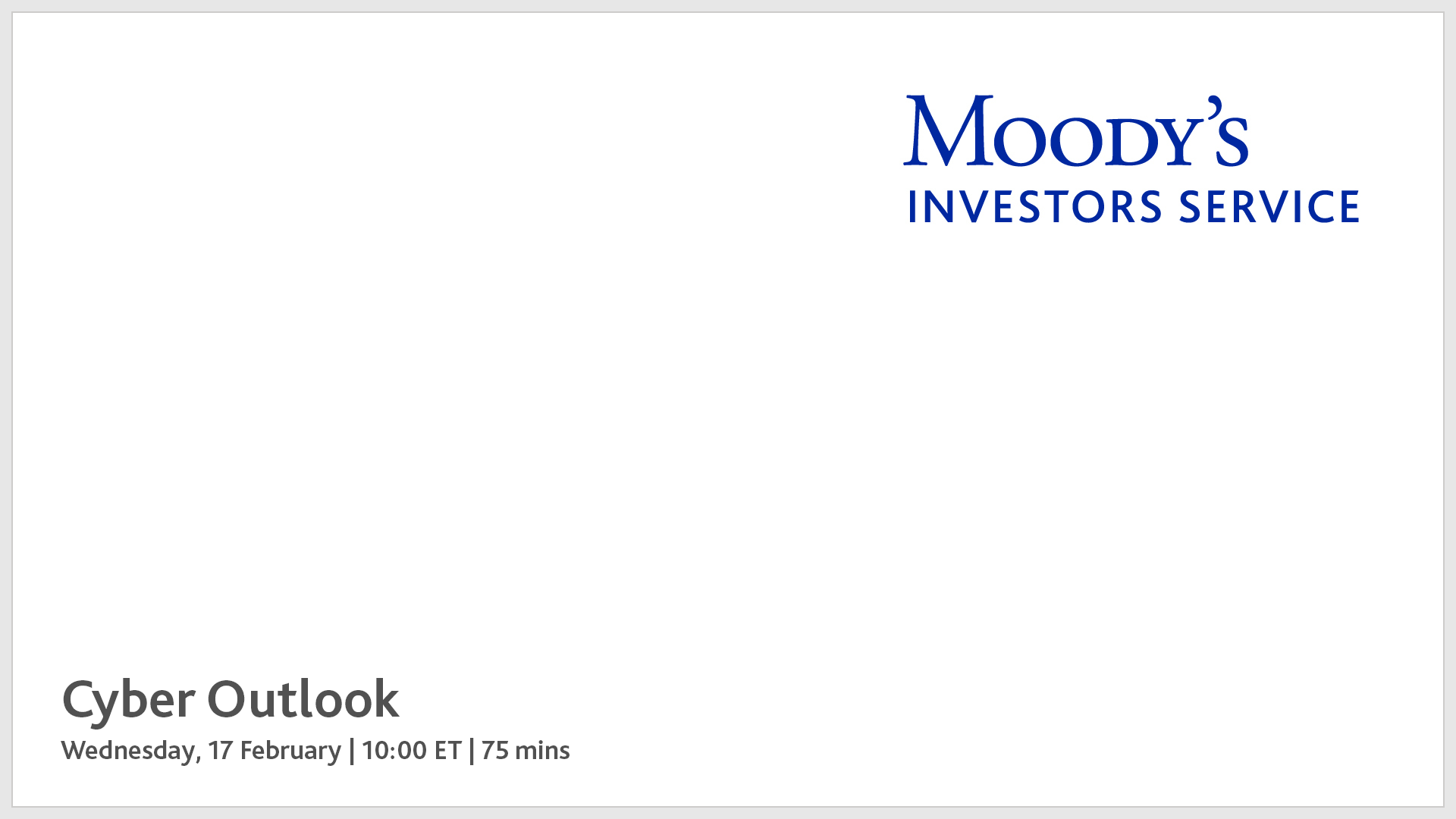 Lesley Ritter is a Vice President - Analyst in Moody’s Global Infrastructure Finance Group. She is responsible for a portfolio of US-based regulated electric and gas utilities as well as natural gas pipeline companies. Prior to joining Moody’s, Ms.Ritter completed her credit training at GE Energy Financial Services where she was an associate in the origination team covering the power, midstream, and oil and gas space. Ms. Ritter holds a Bachelors in Economics from Union College and a Masters in Finance and Energy Policy from Columbia University.

Leroy Terrelonge is an Assistant Vice President in MIS’ Cyber Risk Group, where he works collaboratively with analysts across MIS lines of business to publish timely and relevant research on cyber risk and its impact on financial performance.

Leroy has more than 16 years of risk experience working in government, international education, tech startups and corporates. He recently joined Moody’s from Flashpoint, a threat intelligence company that researches cybercriminal communities, and previously worked as an analyst at the National Security Agency. He has been cited in both domestic and international media on cyber risk issues and has presented at cybersecurity conferences around the world.

Gerald Granovsky currently serves several roles in North America’s Corporate Finance Group.   He is the primary liaison between CFG and MIS Technology, under the implementation of the new partnerships between the rating groups and the technology teams.  Previously, he has been the lead CFG representative on the Analytic Harmonization and Sharing (AHS) business transformation project, along with other IT initiatives that benefit CFG.  In addition, Gerald has been working with the MIS Cyber Risk team to help build Moody's brand recognition around cyber risks through research, publishing and outreach.  Mr. Granovsky also chairs speculative grade rating committees across New York CFG teams.

As part of his responsibilities, Mr. Granovsky was instrumental in developing and updating Moody’s rating methodologies for the Global Distribution and Supply  Chain Services, Communications  Infrastructure and the Telecommunications industries.

Mr. Granovsky joined Moody’s in 2005 as a Vice President, after spending most of his career in the financial services industry covering media and telecommunications companies since 1992.  Mr. Granovsky has been promoted to Vice President – Senior Credit Officer and Senior Vice President during his tenure at Moody’s.

In addition to portfolio management responsibilities, Mr. Granovsky was the lead CFG representative on Moody’s Business Continuity program, and helped manage the disaster recovery initiatives during Super Storm Sandy in 2012.  Mr. Granovsky was the CFG leader on the Loan Covenant Tracker project, which was a two-year endeavor to incorporate loan covenant data into the company’s financial metrics.  He has also been involved in several high profile roles in Moody’s business transformation initiative over the past 5 years.

Mr. Granovsky takes a serious role in mentoring junior analysts and teaches several training courses on capital structures, cash flows and default red flags.  He has participated in all junior analyst mentoring and ambassador programs that Moody’s CFG has run over the last decade.  He is also an active participant in Moody’s Big Brothers Big Sisters program.

Alessandro Roccati joined Moody’s in May 2012 as a Senior Vice President in the Financial Institutions Group, based in London. His portfolio includes large European banks. Prior to joining Moody’s, Alessandro spent fifteen years in equity research as a senior analyst covering European banks at global investment banks: Macquarie, Man Group, Credit Lyonnais and Nikko Securities. He started his career as a credit analyst covering European banks at UniCredito. Alessandro graduated in economics from Bocconi University in Milan

Stephen Morrison is an Assistant Vice President – Analyst on the Technology, Media and Telecommunications team within the Corporate Finance Group at Moody’s. Stephen has covered broad portfolios of technology and business services companies since 2017 and is a co-author of Moody’s Software Industry methodology. From 2014to 2017, he was part of the Technology team at Moody’s covering investment grade and high yield companies. Before joining Moody’s in February 2014, Stephen was an economic analyst with a regional consultancy. Stephen has a Master’s degree in Economics from Rutgers University and a Bachelor of Science in Economics and Finance from Bentley University.

Mike joined Moody’s in September 2017 and is currently responsible for covering the property & casualty insurance sector, including personal and commercial insurers, reinsurers, brokers and title insurers. He brings to this role a wide range of experience in the equity and credit markets, having worked as a sell-side and buy-side equity analyst covering financials, especially insurance, as well as a credit analyst. Prior to joining Moody’s, Mike was co-head of research of a start-up research operation for UBS Wealth Management and also covered the financial sector. Before joining the buy-side, Mike was an equity analyst, primarily covering the property & casualty sector, at Sandler O’Neill + Partners, ABN Amro, and Hoefer & Arnett, now part of Raymond James. Before receiving his graduate degree, Mike worked as a financial analyst at the Industrial Bank of Japan and the Banc of California. Mike received his MBA with an emphasis in Investments and International Finance from the University of Notre Dame, and a BS with a focus in Finance from theUniversity of Southern California. Mike is a Chartered Financial Analyst (CFA) and member of the New York Society of Securities Analysts and the CFA Institute.

Heather Correia is an Analyst for the Dallas Local Governments Ratings Team, and serves as State Lead for New Mexico and is a co-chair of the Dallas Women’s ERG. Prior to joining Moody’s, Heather worked as a Financial Accountant in the private industry in Melbourne, Australia, and at KPMG LLP in Portland, Oregon. Heather holds a Masters in Public Affairs from The LBJ School at the University of Texas at Austin and a BSin Math and Accounting from Linfield College.

Cintia Nazima is an Associate Lead Analyst in Global Project and Infrastructure Finance team in Moody’s Investors Service (MIS), based in New York. Cintia’s portfolio includes US toll roads, airports, public power issuers, project finance and power projects. Cintia joined the team in New York in 2019 having previously worked as an associate analyst in the Public, Project and Infrastructure Finance team based in Sao Paulo office from 2014 to 2017. During her time in Sao Paulo Cintia worked on the portfolio monitoring, research and outreach activities related to a broad portfolio consisting of toll roads, utilities, water and sanitation, project finance and power projects and was the back-up analyst for the entire sub-sovereign portfolio in Brazil.

Being passionate about diversity and inclusion, Cintia has been actively involved as a member of the NY Multicultural ERG since 2019. She is the co-lead of the Professional Development Subcommittee where she manages the Active Language Studio, a program that offers Moody’s employees the opportunity to learn or improve their skills to communicate in a particular language, and other training focused on providing employees with continued development opportunities.

Prior to joining Moody’s in New York, Cintia was a senior credit analyst at XP Investimentos where she was responsible for the coverage of the entire Brazilian infrastructure portfolio.

William (Bill) Foster is a Vice President-Senior Credit Officer in Moody’s Sovereign Risk Group in New York, where he serves as lead analyst on the United States, Canada, India, and World Bank Group credits.Bill joined Moody’s in August 2016, following 10 years at the U.S. Department of the Treasury. He most recently served as Senior Advisor for International FinancialMarkets based in New York, where he was the Office of International Affairs’ first dedicated liaison to New York’s international financial community. From August 2012to March 2015, he served as the U.S. Financial Attaché to India at the U.S. Embassy in New Delhi, where he represented the U.S. Government as its primary economic expert and financial diplomat in India. Bill joined Treasury’s Office of InternationalAffairs as an international economist in 2006, and covered a wide range of geographies during his tenure, including Latin America, South and East Asia. Prior to joining Treasury, he worked as a management consultant at Accenture. Bill holds a Master of International Affairs degree in International Financial and Economic Policy from Columbia University’s School of International and Public Affairs(SIPA) and a BA from Wesleyan University. He is a member of The Economic Club ofNew York and an Industry Advisory Board Member for Columbia Business School’sIndia Business Initiative.

Matthew Jones is a Vice President and Senior Analyst on the Technology team within the Corporate Finance Group at Moody’s. Matthew currently specializes in theSoftware, Connectivity and Communications Equipment industries. Prior to joining Moody’s in 2006, Matthew spent 16 years in the banking industry including positions as Managing Director in the Leveraged Finance Group atCIBC World Markets and as Senior Vice President in the Technology Media and telecommunications group at Royal Bank of Scotland. Matthew also has an extensive background restructuring troubled credits. Matthew is a Magna Cum Laude graduate of TuftsTUniversity with a Bachelors's degree in Mechanical Engineering. He also holds an M.B.A. degree from Columbia University.

Joe Lyons, Technical Director - VisibleRisk - Joe.L@visiblerisk.com - Joe is a Technical Director at VisibleRisk where he is involved with the research and quantification of organizational cyber risk. Prior to joining VisibleRisk, Joe was an AVP of cyber security on Moody’s cyber security team under Derek Vadala. While at Moody’s, Joe primarily focused on vulnerability management, threat intelligence and advanced offensive security techniques. Prior to Moody’s, Joe was an Information Security Engineer at Nasdaq. Joe graduated from Sacred Heart University with an undergraduate degree in Neurobiology and a master's degree in Computer Science.